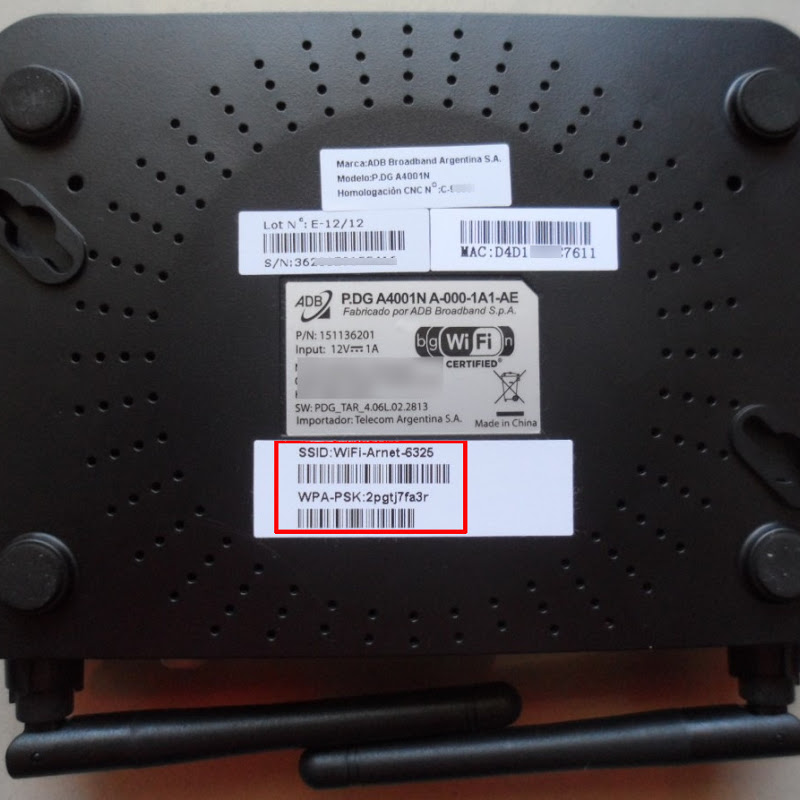 A couple of years ago whether I do not remember badly, I was doing reverse engineering in some Spanish routers deployed by Pirelli as well. After I extracted the firmware and found out a suspicious library with many references to key generation’s functions everything was over. Unfortunately, I could not recover the algorithm itself. Principally, because those routers were not using the same algorithm for generating default keys and simply because such algorithm was not explicitly there. Shit happens! However, as I could not reveal the algorithm then decided to try another way to recover keys. Eventually, I realized that these routers were vulnerable to unauthorized and unauthenticated remote access and any adversary could fetch HTML code from our public IP address. Plenty of HTMLs were able to be downloaded without any restriction, meaning a huge leakage. Being vulnerable to a bunch of evil attacks. This remote information disclosure can be seen on this CVE-2015-0554. On the other side, I do not know whether Argentinian routers are also vulnerable to this vulnerability. Feel free to try it out and let me know too. Just to see how easy was to achieve those keys in the HomeStation(essids-like WLAN_XXXX) in Spain, a simple curl command was enough:

Now, I am gonna explain how I reverse engineered a MIPS library in order to recover the default WPA key generation algorithm for some Argentinian routers deployed by Pirelli. Concretely the router affected is the model P.DG-A4001N. First of all, I am neither Argentinian nor live there. Nevertheless, accidentally I observed some stickers from Pirelli routers in a random forum and as an user had already publicly published the firmware for those routers then I decided to give a try. As I still remembered the file which I dug into for the Spanish routers, I rapidly tried to recover the algorithm in these routers. The writing below is the way I followed until achieved it.

In this section, we are going to reverse engineer a MIPS library, /lib/private/libcms.core, found out in the firmware itself. First of all, let us comment that the firmware was physically extracted for another user (fernando3k) and subsequently unpacked using Binwalk and firmware-mod-kit by me. Once was mounted into our system, we found out a function called generatekey. As you have seen, symbols have not been removed in binaries and external function names are still there because dynamic compilation. This help us a lot in our reverse engineering task. On top of that, we rapidly saw how this function was calling to another one called generatekey_from_mac. At this moment, I decided to give a go to this challenge. Before get started, IDA Pro can help us with the cross references (Xrefs to-from in IDA Pro) between functions. Let’s see how functions are called in the library. (Zoom pictures in to see properly).

Really looking great! Now let’s look at the cross references. We have figured out some tips: 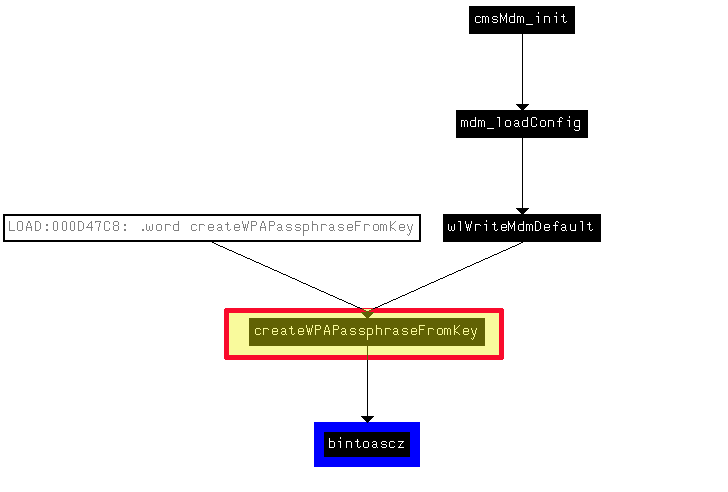 Now we must dissect the generatekey_from_mac function and its SHA256 callings to figure out how many parameters are being sent as input data. Before calling generatekey, a string 1236790 is sent to this function as first argument ($a3). Nonetheless, we have to guess which is the right order for the SHA256 function, I mean how many updates there are. If we observe the below picture, we will see this step. 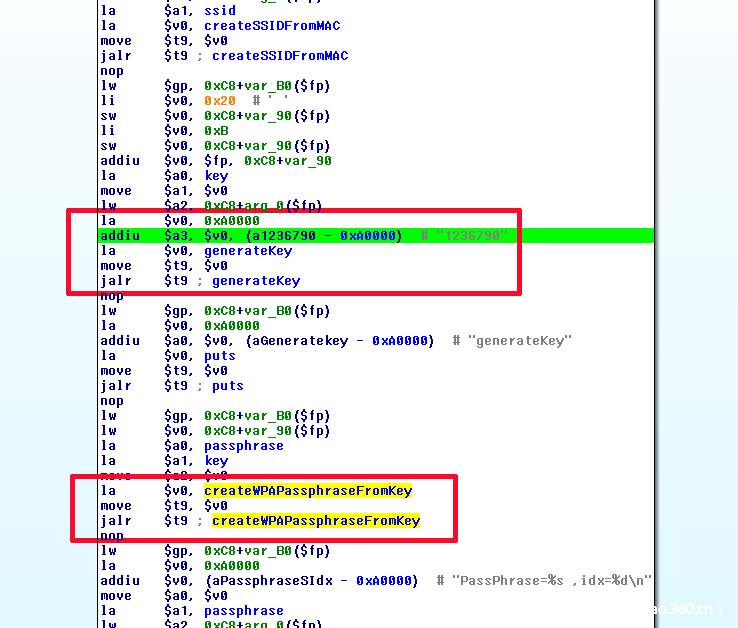 From generateKey_from_mac we realize that: (Look at image below) 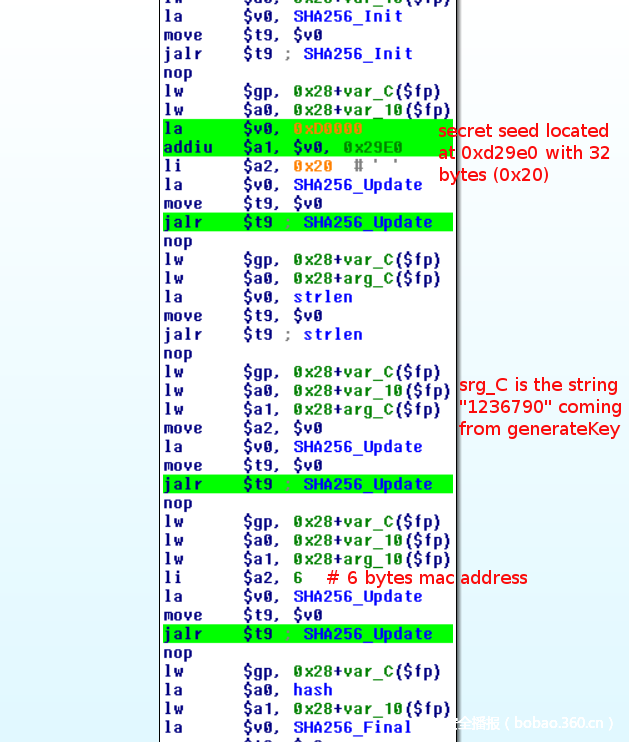 As we know that the first argument is located at the offset 0xd29e0, just a jump there and let’s reveal the secret seed used in the SHA256. Now we have guessed the first argument, and we can prepare those 32 bytes into a byte-array structure to generate the SHA256 hash later on. This secret seed has been used by Pirelli too in other countries like Italy or Austria (Look at the references on the source code for more info). Furthermore, below that we can also distinguish the charset finally used to generate keys with. 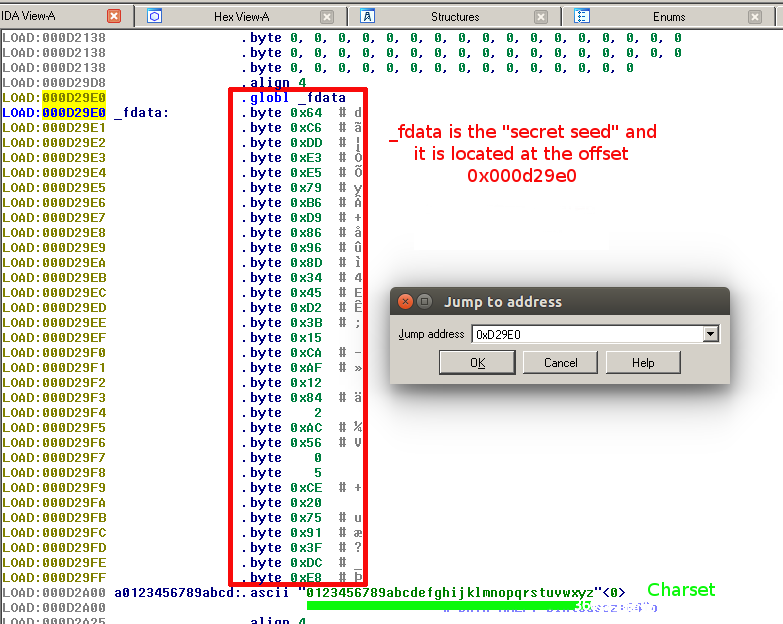 Secret data found out in the library.

In the end, we conclude that the algorithm is as follows: (mac address needs to be incremented by 1)

More details on how keys are eventually generated in this python function:

Since I attempted to do a responsible disclosure and neither ADB Pirelli nor Arnet Argentina were interested to discuss the problem, I have finally decided to do full disclosure to speed up the process of fixing. It looks like the only way with some vendors, just enforce them to replace routers for avoiding intrusions. Many things can happen whether your router with SSID Wifi-Arnet-XXXX has the default password. For your information, default passwords are located in a sticker at the bottom of routers. If you are owner of these networks, please change your password as soon as possible. You should always change the default passwords, though. An adversary, within of the wifi range, could access to your network and commit any sort of fraud. Be safe and change the passwords right now!

This proof-of-concept and many Pirelli default key generation algorithms might be found at my Bitbucket repository. To be installed just make sure you got git installed on your system and then run: